The Lady Vanishes is one of those shows that doesn’t fit into simple categories. Instead it takes some of the best bits of different styles and genres to form something completely different and the result is utterly beautiful and haunting.

A phenomenal, genre-defying work that deserves more than a three night run at the Fringe

Inspired by Victorian photography which seemed to reveal images of ghosts and spirits living amongst us, Dudendance have taken those images and transposed them into the Haining House and Estate in Selkirk for a site-specific dance piece that is a feast for the senses. Guided around the estate we see ghosts all around us, acting out moments from their day to day lives in slow motion with incredibly controlled movements seemingly lost in time. One stands motionless looking across the lake, another collects wood, one sits at the window reading a book – all typically banal actions that are suddenly rendered fascinating. The ten ladies never speak allowing us to project our own thoughts, ideas and speculations onto them. Are they the same woman? Did they live at the same time? What were their lives like? We’re allowed to choose and that’s part of the beauty of the piece – there’s no story to try and latch onto rather it is a pure experience of time, memory and history.
There are plenty of ghost stories performed during the Fringe but Dudendance have gone one step further by bussing the audience out to Selkirk. The grand country house, the expansive grounds, forests and lake not to mention the sensation being outside to hear the animals and experience nightfall in real time forms an integral component of the show.
There’s a noticeable sense of trepidation at the beginning in which no one in the audience really knows what we’ve let ourselves in for and part of me wonders how different the experience might be if it were experienced individually as the group mentality seems to be to clump together for safety. Nevertheless it’s a phenomenal, genre-defying work that deserves more than a three night run at the Fringe – I can’t wait to see what they come up with next.


GHOSTS and old country houses are the stuff of many a spooking on the Fringe. Last weekend, however, Dudendance Theatre spirted audiences away to an 18th century manor house with, it’s said, a veritable apparation. Haining House, by Selkirk in the Scottish Borders, is set within wooded enclaves that spill down to the edge of a picturesque lake. Centuries of local and family history have played out at Haining, and as we looked out across the lake at twilight, a lone figure in flowing white was like a lure to eerie imaginings – which is, of course, the effect that Dudendance’s spectral pageant is meant to trigger.
If an earlier work, Borderlands (at Dryburgh Abbey), benefitted from the reminders of mortality in both graveyard and ruins, at Haining it was the sight, sound and smell of drenched nature that created a context of change and decay for the white-clad forms that silently melted in and out of the trees or drifted from the shadows around buildings. And though Dudendance had devised a soundscape for when we reached the house, the sense of unease and melancholy stirred up by the solitary wanderers was heightened by crescendos of birds cawing. Shakespeare's “Light thickens, and the crow makes wing to the rooky wood” suddenly became an intense reality. No sign of Macbeth inside the house, but wraith-like beings – paused, as if they’d morphed out of the plaster – and a sepia film filled a wall with the lost and drowning youth of yesterday, while singer Fiona Soe Paing gave voice to haunted lament.
Whatever secret sorrows linger still at Haining, Dudendance’s exquisite interventions seem to reach below the surface of the modern world, reminding us the past is ever with us even if we can’t always see it.

Taking place in the stunning, tranquil surroundings of Haining House down in Selkirk, The Lady Vanishes is a melancholy and meditative piece. Eschewing traditional dance forms in favour of slow, stretched movements, it draws on Victorian spirit photography and a number of horror tropes to create a show that would be soothing if it weren’t so uncanny.
The audience is led through the grounds of the dilapidated house, catching glimpses of women in flowing white dresses. Their faces are never seen, and even though they are sometimes sighted together there’s a sense that these may all be one woman, multiple manifestations of the same trapped soul. Clever use is made of the woods and the still, reflective lake to make the audience question what they see. It’s never terrifying, but constantly mildly unsettling.
The show loses focus somewhat towards the end. It feels like it reaches a climax and natural end in a mesmerising sequence just outside the house, but after that it continues as the audience is led indoors to see a projected video accompanied by a live singer. The music is very beautiful, but the shift from the outdoor setting and sounds of nocturnal wildlife waking up to welcome the night, to an indoor space with projectors and microphones, is a bit jarring. The video also seems to invoke the folk tale of the Cruel Sister, heavily suggesting a narrative after previously leaving the audience to fill in the blanks with their own imaginations. It really isn’t necessary. The piece would feel complete with nothing more than the dancers and the audience and whatever story they create between them.
The Lady Vanishes ran at Summerhall at 19.00 until 15 August. Running time 3 hours 30 minutes (including bus journeys).

This is an installation performance by Dudendance Theatre set in the beautiful grounds of Dryburgh Abbey, south of Edinburgh. Dancers perform a meditative narrative in and around the ruins.

Borderlands is a site-specific installation performance, set in the Dryburgh Abbey grounds, produced by Dudendance Theatre. The Dudendance Theatre Company creates innovative narrative movement productions that often interlace film and soundtrack. Dryburgh Abbey is a beautiful location for such a performance because it is a complete medieval ruins, with lush grassy lawns connecting the buildings, located in the borderlands – just over one hour drive south of Edinburgh.
The Gothic architecture and mysterious passage ways that link each part of the buildings are brought to life when about ten dancers from Dudendance appear and disappear around the grounds.
A bell rings out and a figure walks very slowly in the distance, holding her dress out so the silhouette is sculptural and mysterious. The pace of the walk is very slow, which makes the audience members who are visiting the grounds of the abbey stop and wonder what they are seeing. Before you know it, another figure looking almost the same appears from another direction, then another in the far distance. Each performer wears a long billowy white dress and narrow bonnet that covers most of their face, with beautiful costume design by Heather MacCrimmon. Some dancers have long white trains and three others carry huge white flags that echo a rally to war in days gone by.
The timing of this piece is astonishing because everywhere you look another figure starts or ends their journey to melt into the woods or cracks of the ruins, as we are led around to different parts of the grounds. The figures also appear high up draping themselves over walls. These spirits are of the prior inhabitants of the area and they move with a purpose, always at the same slow speed, each one with her own narrative provoking the audience to reflect on or imagine the lives of these ancestors.
During the performance the Andante Chamber Choir led by John Stone sang The Requiem Mass by Tomas Luis de Victoria. The choir was hidden in the main room of the abbey and was heard throughout the grounds, which was wonderful and added a lot to the special atmosphere. Although we experienced this performance on a lovely sunny day, I can imagine that it would evoke different narratives on rainy days or in the evening. Directed by Clea Wallis and choreographed by Paul Rous, the concept of this installation performance is superb and it is truly a unique, meditative experience.
Posted by Dudendance at 1:12:00 AM No comments: 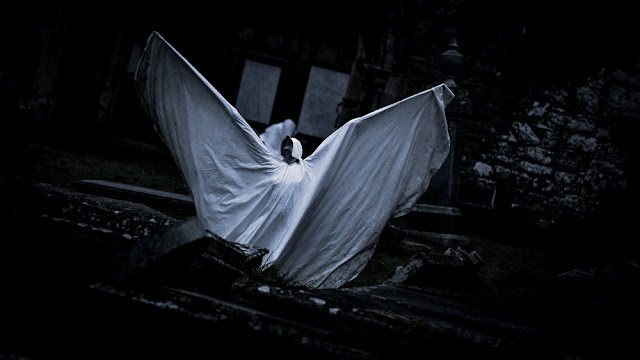 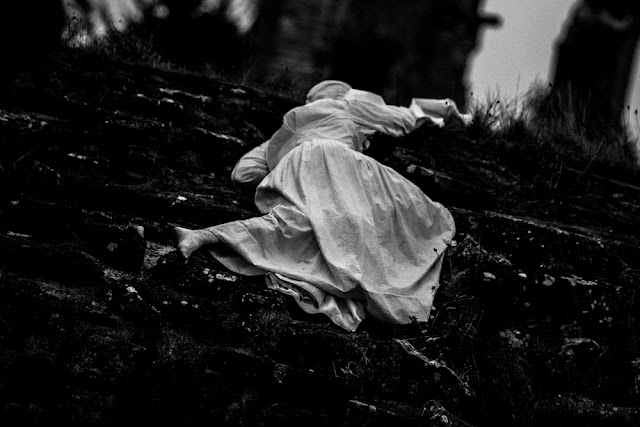 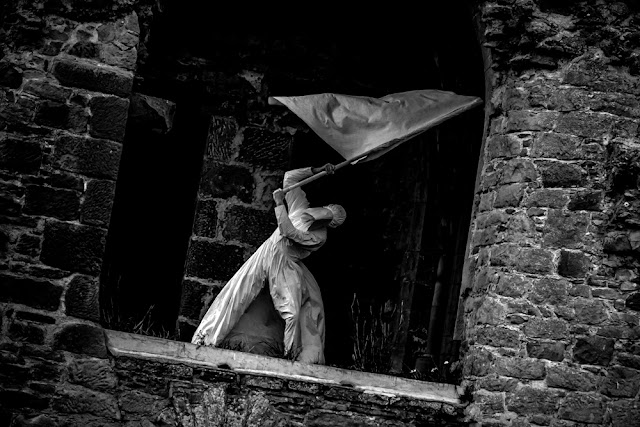 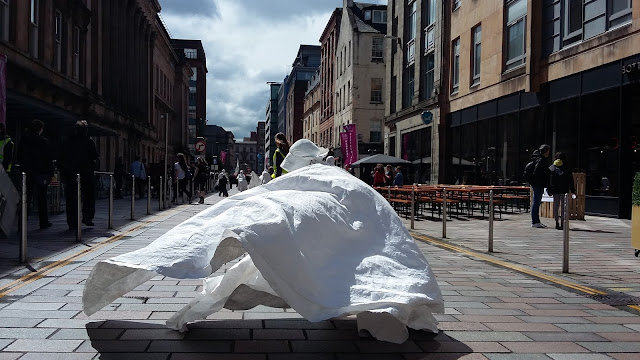 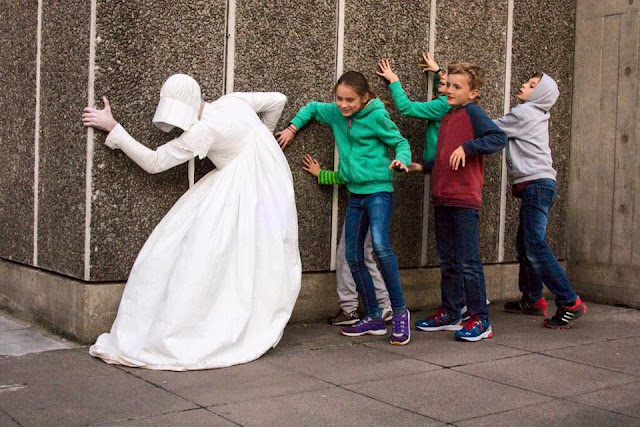 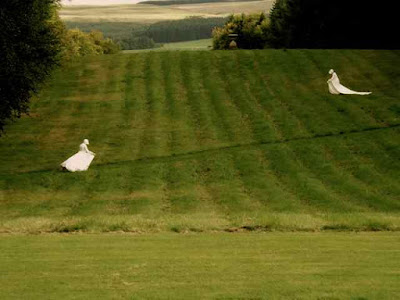 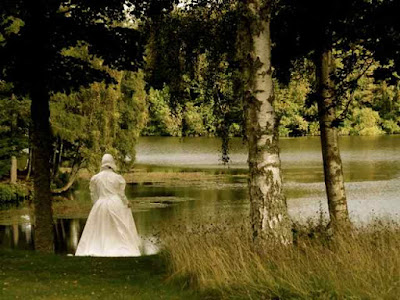 Latest reviews from the weekend:


http://totaltheatre.org.uk/dudendance-borderlands/
and some great images from Michael Begg 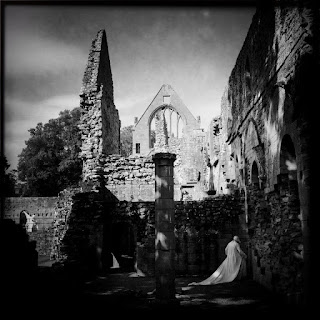 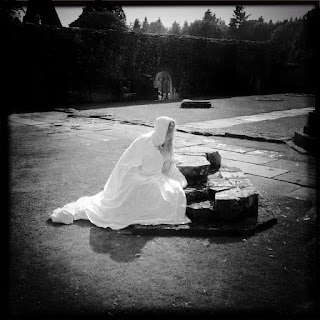